It is possible to calculate amplitude parameters of roughness common to all surfaces when numerical data z(x,y) or z(x) of the surface are available.

Rough surfaces can be characterized by picturing them through the use of a random stationary periodic function of which the probability density must be determined. This heights distribution can then be compared to a Gaussien distribution which has a standard deviation s. This distribution is defined by :

The surface can also be characterized by calculating its contact area in function of the depth defined by :

This function, expressed in %, is called Abbott’s curve. 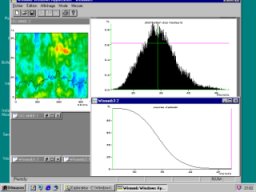